From the TV anime “Boku no Hero Academia 3rd season” which starts broadcasting in April 2018, the designs and cast information about the new characters just arrived!

The information released this time is the new enemies who fight against Izuku Midoriya and Heroes at U.A. High School!

Look at the powerful new visuals, they are intense. you should look forward to seeing what kind of stories will be developed in TV anime 3rd season.

“Boku no Hero Academia” The design and cast of three new characters!

The designs of Muscular, Mustard and Moonfish!

“Muscular” that has a synonym of “blood insanity” and hurts people for his own pleasure.

“Mustard” wearing a gas mask and a school uniform.

“Moonfish” is the murderous demon that received a death sentence and the whole body is being restrained.

What kind of abilities will they manipulate and how do Deku and other heroes stand up?

Cast information is arrived as well!

“Boku no Hero Academia THE MOVIE”

Blue is Back! Eir Aoi announced that activity restarts with PV of the new song “Promise”
The collaboration cafe with “Slow Start” will be held at nicocafe from 15th February! 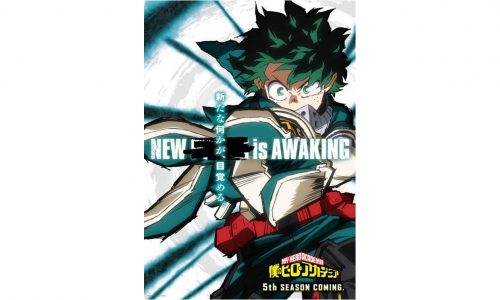