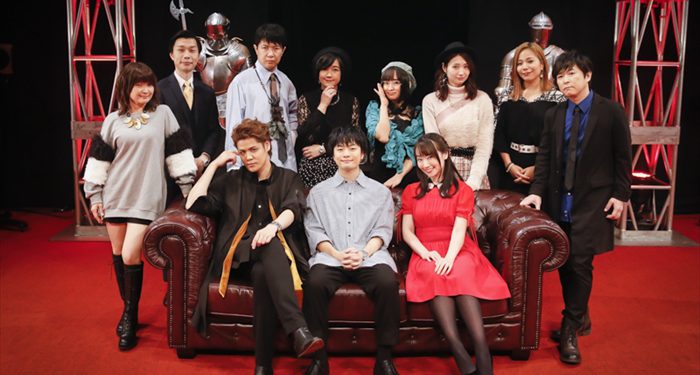 A special event of Persona 5 the Animation called Persona 5 the Animation “Masquerade Party” that features the 9 main cast held in Olympus Hall Hachioji on the 25th of November, 2018 has two parts: “Detective Daylight” and “Phantom Midnight”. There was also live viewing all over the country at the cinemas. We had the privilege of attending the the “Detective Daylight” session and here’s a report of the event!

Upon entering the lobby area, we are greeted by live sized stands of the main cast all dressed up for the Masquerade Party. Everyone started taking pictures of the dressed up Phantom Thieves, you could really feel their love for the young vigilantes.

The stage was decorated beautifully, with equally enchanting background music playing, all very classy and suitable for the “Masquerade Party” theme, as people started entering the hall while we waited for the event to begin. Fans coming in with the merchandise they bought, most of them were dressed in black and red, befitting of the main colors of the logo. 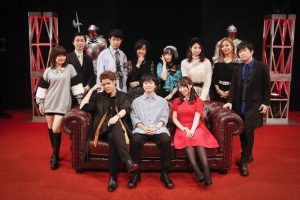 With Yuuki Iwai of comedian duo Haraichi as MC, the main cast entered the stage one by one in the following order: Jun Fukuyama (Ren Amamiya), Mamoru Miyano (Ryuji Sakamoto), Nana Mizuki (Ann Takamaki), Ikue Ōtani (Morgana), Tomokazu Sugita (Yusuke Kitagawa), Rina Satō (Makoto Niijima), Aoi Yuuki (Futaba Sakura), Haruka Tomatsu (Haru Okumura) and Sōichirō Hoshi (Goro Akechi). Each of them did a small dance sort of intro as they entered with the exception of Sugita who simply waved stiffly with one hand, eliciting laughter from the audience. While everyone cheered for each of them, Goro Akechi’s voice actor received an especially resounding cheer. 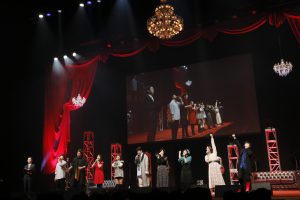 The cast did a self introduction and Fukuyama started it off but stuttered and brightened the mood in the entire hall thanks to that, he then recovered and continued perfectly from there on. Ending with Hoshi who said that he wanted to play it cool in a cool voice and manner like his character, Akechi, but then immediately broke character shouting out “Pappi!!!” in a rather high voice to the delight of the fans who cheerfully echoed the call. 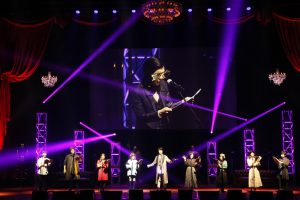 They all left the stage and then came back to settle down on the two sofas in classy poses in a kind of awkward manner which was hilarious as Akechi took the stage to open the start of the story. Befitting of the title of the event, the story was about infiltrating a masquerade party happening in a club in Shibuya. In preparation for that, Fukuyama lead everyone to begin doing a sort of dance with each of the cast doing a comical dance move, leading up to Miyano and Tomatsu going up front to do an impromptu pair dance sort of deal. The crowd roared with laughter as they finished and returned to their respective places to continue the story, 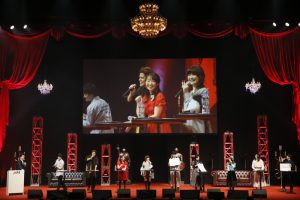 Once the story made some progress, a game corner begun and the cast were briefed on the rules. This was not just any random game, the progress of the story depends on how well they do in the game. For the game, the cast has to each write down one katakana or hiragana word each to form a proper word based on the question with only 3 hints to go on provided by the MC. They aren’t allowed to communicate with each other on what word they think is the answer and it lead to some pretty hilarious happenings. Right on the first question, Fukuyama who was the first letter wrote “shi” which upon seeing the response of the rest of the cast to come after him, quickly changed it to “ko” where they successfully managed to get the right answer which was “compact disk” in katakana. Throughout the 4 questions, many hilarious moments ensued. Some examples include Otani drawing a sad face instead of writing an answer because she was sad as she couldn’t figure out the word and Sato drawing a star instead because she had no idea what to write. Out of the 4 questions, they managed to get a good 3 right, with the single failed question resulting in an hilarious answer. 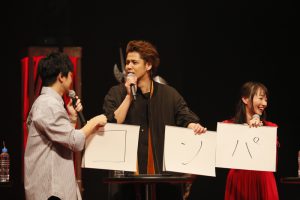 After the game corner is over, they went back to voice acting the continuation of the story and Sato was responsible for saying the code word to get into the area they need to go to in the story but she did an ad lib where she first said the one wrong gibberish answer they got before saying the right one. To which everyone responded in resounding laughter. Even though she said the wrong code first, the sound of the door opening played which Yuuki pointed out saying that the door actually opened even though it was wrong. It was just one comedic moment after another. Back to the story, they managed to defeat the bad guys and a cool animated clip of the cast played on the screen to end it magnificently. 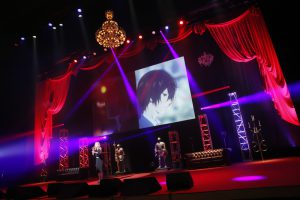 Just as we thought the show has ended and it was time for the credits to roll, Lyn appeared to and begun belting out “Break In to Break Out”, the opening theme for the animation. It was accompanied by beautifully arranged lighting effects, one particularly memorable part had several white beam lights forming a sort of cage around Lyn and then bursting open to a bright yellow light when she sang “breaking out” and it was spectacular. The second song “Infinity”, ending theme of the animated series wrapped up the performance with beautiful bouncy colorful lighting to go along.

The date of airing of the new Persona 5 animation, Dark Sun was announced to be the 30th of December, 2018 along with the release of the main visual for it, followed by sale information of the “PERSONA 5 the Animation Keyframe Book”. The reaction of the crowd seemed promising. 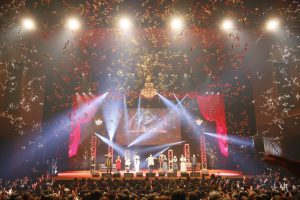 Wrapping it all up, the cast got back on stage to give a final farewell greeting. They shared some of their feelings on the event and their characters as well as sharing how they had really good teamwork and clicked with each other very well which made their recordings and events especially fun and enjoyable. As you may have noticed from the photos, most of the voice actors are dressed in their character’s colors and Mizuki revealed that it was not planned together and they all simply decided to do it on their own, showing how they all were very much of one mind. Otani came up with getting all the live viewing audience to do a “Weei!” call together and everyone got really spirited, enthusiastically responding in return. The event ended with a shower of shiny confetti on a high note.

Cells at Work! Highlights from all the episodes!
figma “Goblin Slayer” available for preorder now!