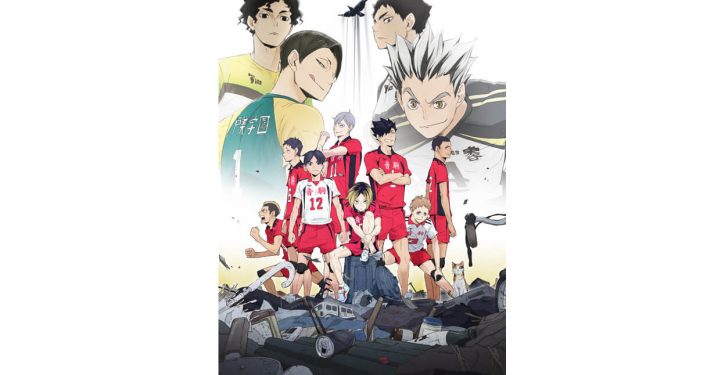 Highly rated and currently running in Weekly Shonen Jump (Shueisha) with over 34million copies of comics sold, is the next generation of mainstream sports manga Haikyuu!!. The release of OVA “Haikyuu!! Land vs. Sky” which focuses on the decisive match between the Tokyo representatives in the Spring nationals announced, the key visuals has also been revealed!! In addition, the news of season 4 going on air has also been made public! In preparation for the official start of the new anime series, a collaboration between Haikyuu!! and V.LEAGUE has been confirmed!!

On top of that, the visuals for the character Suguru Daisho, captain of Nohebi Academy who will be facing off Nekoma High for the chance to be Tokyo’s representative has been revealed!! Kazuyuki Okitsu has been announced to be the voice actor for the role! At the same time, the new character settings for the main cast of Nekoma High and Fukurodani Academy who will be facing off for the Tokyo qualifiers has been revealed as well!!

With Spring nationals on the line, Nekoma, Fukurodani and Nohebi face off in the Tokyo qualifiers!!

※Bonus contents may be subject to changes without prior announcements.
※Once the Limited Edition version has been sold out, it would be changed to the normal edition.

The OVA will be available in Jump Festa 2020 before the official release date!!

OVA “Haikyuu!! Land vs. Sky” on both blu-ray and DVD will be available for purchase at the TOHO animation booth in Jump Festa 2020 during 21st (Sat) – 22nd (Sun) December 2019 at Makuhari Messe. In addition, you will receive the following premium bonus items:

※The illustration for both 1 and 2 are the same. The design will be released at a later date.

New cast for Nohebi Academy, Suguru Daisho, will be played by Kazuyuki Okitsu!

The character visuals has also been revealed!

Nekoma’s Setter. Known as the brain and spine of Nekoma for his ability to analyze his opponents and wide field of vision.

Nekoma Volleyball Club’s Captain. Besides his excellent blocking abilities, his high receive abilities are also praise worthy, excelling at both offense and defense, he is the omnipotent Middle Blocker.

A spiker who possesses the power and technique of a top class player on the national level. However, he is inconsistent and has tendencies to lose his cool during a match.

The calm and composed setter of Fukurodani, he analyzes the flow of the match with acute precision. Undoubtedly excellent at the toss, he is vital in bringing the team together as he is able to follow up for all sorts of situations.

The 4th season for the anime premieres on 28 MBS/TBS network stations in January 2020 across the country every friday at 1:25am, in the Super Animeism timeslot!

Collaboration between Haikyuu!! and V.LEAGUE, the nation’s top league for volleyball, has been established!

In anticipation of the new anime series, all sorts of collaborations with V.LEAGUE are being planned. Please do look forward to news about the details in the near future!!

Including the predecessor league, V.LEAGUE has over 50 years of history as Japan’s top-level volleyball league for both men and women. From the highest ranked DIVISION 1 to 3, the 2019-20 season consists of 26 men’s teams and 20 women’s teams. Scheduled to begin on the 12th of October for women and the 26th of October for men, spanning all the way till March of 2020, a slew of exhilarating matches will be taking place all over Japan!

To commemorate “Haikyuu!! no hi” on the 19th of August, “Haikyuu!! No Hi Zenjitsu-sai” was held in  United Cinemas Aquacity Odaiba on the 18th August, today. Ayumu Murase (Hinata) and Kaito Ishikawa (Kageyama) turned up at the talk show. Kicking the event off, the two of them were asked to pick their personal best episode that as been aired so far in the anime. Murase picked episode 25 “The Third Day” from season 1 while Ishikawa chose episode 1 “Endings and Beginnings” from the same season. As for their reasons for their choice, Murase said, “After a lot of deliberation, I went with the last episode of season one. The two of them yelling at the stadium with their feelings as one really left an impression on me.” While Ishikawa responded, “The beginnings of a series really leaves a mark on me. Thinking back on it now, I was able to play something that can only be done at that time in the first episode.” They then went on to passionately talk about the scenes that we really memorable in the first season.

Aside from that, lots of new information were also made public during the event. When they announced that in preparation for the premiere of season 4 of the anime, an OVA called “Haikyuu!! Land vs. Sky” featuring the Tokyo qualifiers would be released, the crowd roared with joy.

In addition, they also announced the cast for the new character who will appear in the Tokyo arc, Captain of the Nohebi Academy’s volleyball team, Suguru Daisho, who will be played by Kazuyuki Okitsu. As the crowd was going mad following the reveal, Okitsu came on stage as a surprise guest.

When asked about his impression of Daisho and how he feels about being cast, Okitsu stirringly replied, “It’s an honor! I will do anything to win (at the Tokyo qualifiers)!” Following that, he was asked about the original comic, Okitsu commented, “I’ve heard about Haikyuu!! from a lot of different places, so I’m really happy to be able to be a part of this work in this way.” as he continued talking about his enthusiasm for the new OVA.

At the end of the event, the guests gave thanks to the fans who have gathered for the show.

Murase: Being a part of this series for 8 years, I, myself has also grown and been natured by the work. I’m looking forward to the TV anime, and to not betray the expectations of the viewers, I will continue to do my best.

Ishikawa: In order to get the passion that I had from the beginning back, I will rewatch the series so as to imbue the performance in season 4 with the same passion from the start of the series.

Okitsu: I will give my all to play my part in both season 4 and the OVA. I’ll be in your care.

In accordance to the usual custom of Haikyuu!! Events, they ended it with a “Otsukareshita!” call to which the audience cheerfully responded with “shita!!”, ending the event with roaring success.