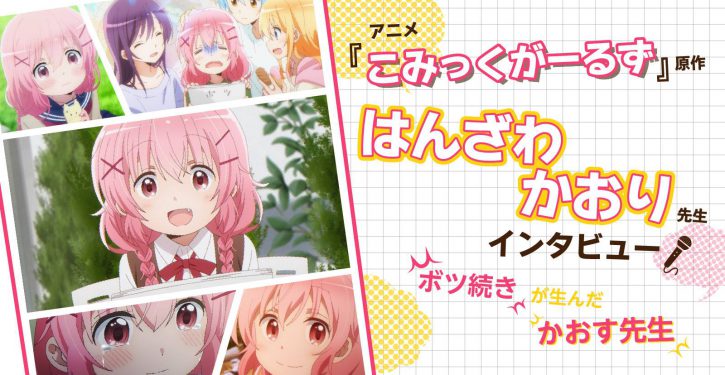 The anime adaptation of Comic Girls is currently on air.

The story begins when Kaoruko Moeta (pen name “Kaos”) moves into a dormitory for female mangaka. This is a story that shows us the daily lives of female high school artists who draws manga, beginning with Kaoruko, Koyume Koizuka, Ruki Irokawa and Tsubasa Katsuki.

This time, we have the creator of the original work the anime Comic Girls is based on, Kaori Hanzawa, here for an interview. From the sensational opening song “Memories” to the secret behind the creation of “Kaos”, we’ll be discussing lots about both the anime and the original manga! 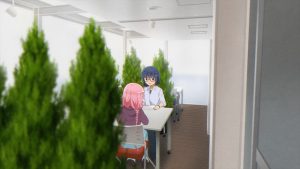 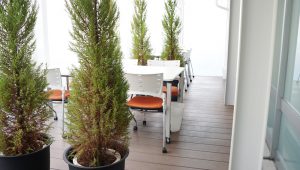 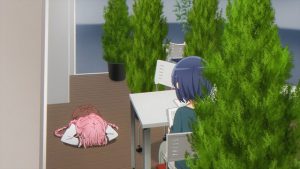 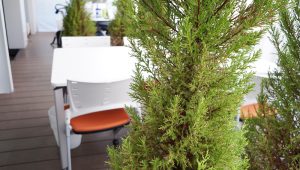 This interview took place in the meeting room in Houbunsha (“Bunhousha” in the story) where Kaos-sensei and her editor in charge, Mayu Amisawa, hold their meetings in the manga! 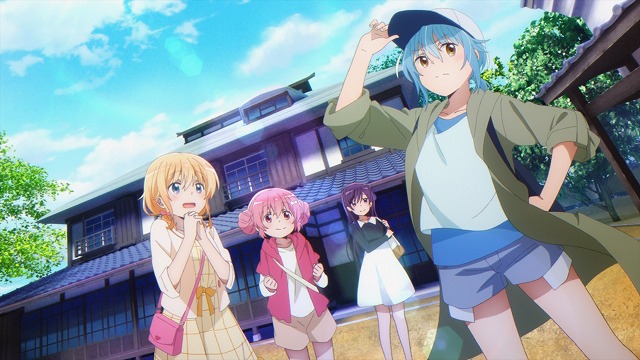 Q: The manga Comic Girls began serialization in the magazine “Manga Time Kirara Max” in 2014. The television anime is being broadcast right now, but what were your thoughts when you first watched the anime?

A: I thought that it was really easy to watch! Though it depends on the character, some of them have come to look really lively in the anime. When I met my brother some time ago, he told me that my manga doesn’t suit his tastes and he wouldn’t read it. (Laughs) But he got really hooked onto the anime and I thought to myself: to think that I’d be able to feel the power of an anime adaptation in this way… (Laughs)

Q: I heard that your mother is also watching the anime. 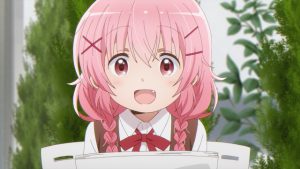 A: She watches it every week too. Even though it airs on midnight, she watches it in real time weekly even while complaining that she’s sleepy. (Laughs) My mother really doesn’t read manga at all, and she doesn’t know how people enjoy them in the first place. But she says things like, “the rhythm in the first episode was really well done!” and, “it gets more interesting with each part!”, just like how fans react, which really surprised me.

Q: Naturally, the characters are really unique but the cast has also done very distinctive performances. What are your thoughts about the cast?

A: It was extremely difficult to choose who would play which character. Opinions were divided even amongst the staff… It differs with every character, sometimes we’ll hear just one word and immediately think, “it’s a perfect fit”, while other times it’s like, “the aura is sort of similar somehow”. However, it feels like the characters and the cast slowly began to synchronize. The cast has been picked through various means but they all get along very well, and I feel like it may have been a case of miraculous casting.

Q: The cast of the four main characters is really a miracle team. Even amongst them, doesn’t Hikaru Akao, the voice actress for the protagonist, Kaos, really fit the image of the character perfectly?

A: After narrowing it down in the final group, we chose Akao because she wasn’t only cute but is able to really bring out the Kaos-ness through her acting. I think that maybe Akao herself might actually be Kaos-ish…

Q: What do you think about the opening theme, “Memories“, and the ending theme, “Namida wa Misenai“?

A: “Memories” really reminded me of the times when I first made my debut as a mangaka! I feel better just listening to it, and it gives me the strength to keep fighting. On the other hand, the ending theme reminds me of the breaks you take after working hard for a while, those times when you’ll say, “okay, I’ll take a bit of a breather, and then I’ll get back to work”. It’s a song that resonates very much with my current self. The two theme songs each have their own unique strengths, but I like them both!

Q: “Memories” has an especially interesting quality to it, doesn’t it? 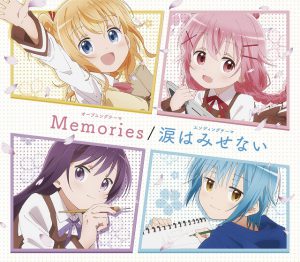 A: There was that time when many fans told me that the “masshiro na mirai” in the first line of the song sounded like “massuro na mirai” when they heard it, but to me and the other staff, it already sounded like “massuro” from the recording stage, which made quite a buzz for a while! (Laughs) I remember our editor mentioning that through the chat when Akao (Kaoruko’s VA) was recording right in front of us! (Laughs)

Q: That’s quite the shock everyone must have felt during the recording session. (Laughs)

A: The other VAs aside from Akao have already done songs on other titles, so I could check out their singing voices beforehand, but this was the first time I heard her sing. I thought, wow, it’s even better than I expected… It’s got an addictive edge to it. Speaking of which, if you start looking out for that “massuro“, it starts to sound like “masshiro” sometimes… It’s really quite strange. (Laughs)

Q: I heard the first press edition of the Volume 1 Blu-Ray/DVD, due on June 27th, will have a CD featuring the “Kaos solo versions” for both the main themes. It seems like we’ll have more earworms to look forward to on top of the “massuro“. 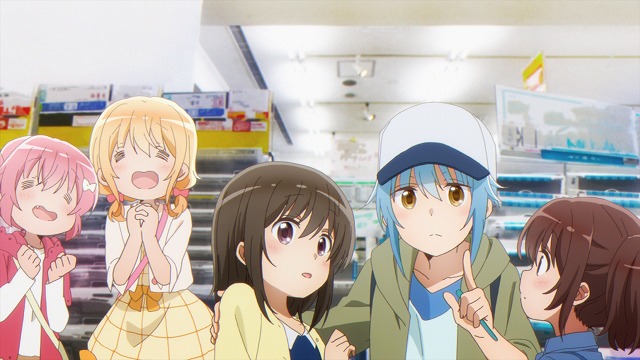 Q: So, you were also present during the scenario meetings for the anime. What are your impressions of the anime staff of Comic Girls after seeing how they work in person?

A: My impression was that they’re all very serious and sincere. Whether it was when they were interviewing several different mangaka to get material, or going to art supply stores for location hunting… They’d read the original manga very carefully, and worked really hard to adapt it to the screen. You can feel their spirit and conviction in making the anime.

Q: By the way, when Comic Girls was broadcast on the streaming service Crunchyroll, it was the most watched anime of the spring 2018 season in Missouri…

A: I wonder what it is about Comic Girls that the audience in Missouri really liked! With all the differences in culture and everything, it’s really quite mysterious. (Laughs)

Q: Can we have a message for the audience at Missouri?

A: Kaos, you can say, is stuffed full of all the negative parts of a Japanese person…  (Laughs)

It makes me very happy that there are people who love Kaos regardless of national boundaries. Thank you very much for watching Comic Girls!

A Mountain of Rejected Manuscripts and the Conception of “Kaos-sensei”

Q: Was there a particular reason that prompted you to start drawing Comic Girls?

A: Well, in one of my earlier serialized works, I had a character who drew manga. I remember that it was fun to draw that character, and my readers said that it was interesting for them to read as well. It made me wonder if I might be good at making characters who are a lot like myself, and since then I’d always wanted to work on a story about a mangaka.

Q: So, what’s the story behind Kaos’ creation? 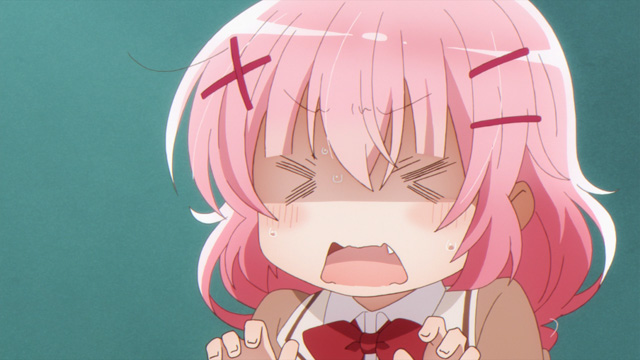 A: I didn’t just simply decide I wanted to draw a manga about a mangaka and came up with Comic Girls, actually. Like Kaos, there was a time when I repeatedly got my manuscripts rejected, and that went on for several years. It was so bad that I seriously thought that I would never be able to work on a serialized manga again.

It was because I had that particular experience that I started feeling like making a character like Kaos, who is a little negative about things, and by adding several other ingredients to that mix, Comic Girls was born. 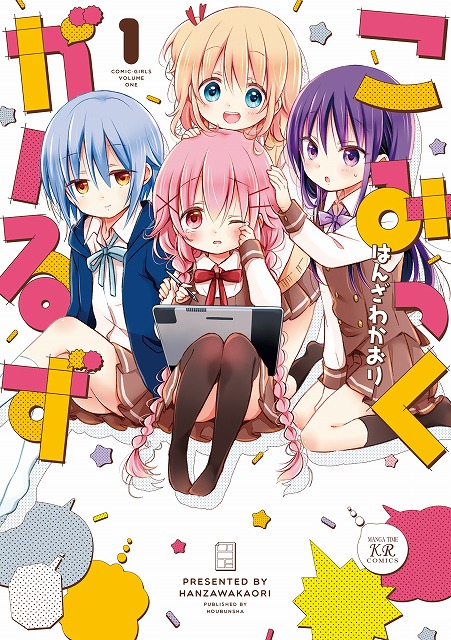 Q: I see. The anime only covers the story of Comic Girls up till the 4th volume, but the manga doesn’t end there. Can you tell us a little about what happens next in the comic?

A: A new mangaka will be joining the cast past Volume 4, which means we’ll be getting new kinds of drama and conflict. Kaos ends up seeing the new cast member as a little sister of sorts… Kaos might end up playing the mentor figure, or maybe she will stay just as she was—I’d like everyone to read on and find out for themselves!

A Message for Fans and Aspiring Mangaka 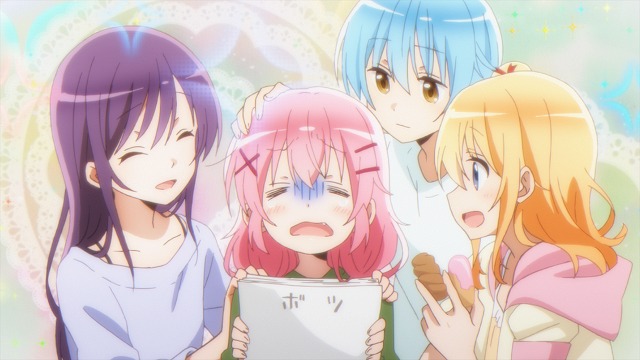 Q: To wind up the interview, can we have a word or two for the fans reading this interview?

A: Both the original manga and the anime adaptation have their own unique strengths, so if you’re only familiar with one of them, I’d be happy if you can check out the other one as well!

Also, in Comic Girls, I try to include as many kinds of characters as I can, all with their own worries and fears, as well as their own reasons for fighting on. I hope everyone can find someone they like and sympathize with the cast, who they can cheer on…or, perhaps, think of them as friends to both work hard and have fun with together.

Q: If you don’t mind, can we also have a few words for all the aspiring mangaka out there?

A: There’s no one-size-fits-all approach to how you make manga—whether it be digital/traditional drawing methods, reference gathering, or the way they think, every mangaka is different, so don’t be afraid to try out many things and check out how various other mangaka draw!
Much like in Kaos’ case, there will be times when no one is really expecting you to come up with anything great, but I think it’s really admirable if you can keep on trying even then.

I think it’s common to find people who keep trying their best despite how lonely they feel in this job. In times like that, I’d like them to keep their enthusiasm alive and keep pushing forward—just like how we see Kaos and her friends at the dorm power on and keep encouraging each other despite their hardships. I hope that, even if they can’t find fellow mangaka around them, watching Comic Girls will remind them that they’re not alone in their struggles, and give them the strength to carry on.

The official fan book will be released on 2nd July. 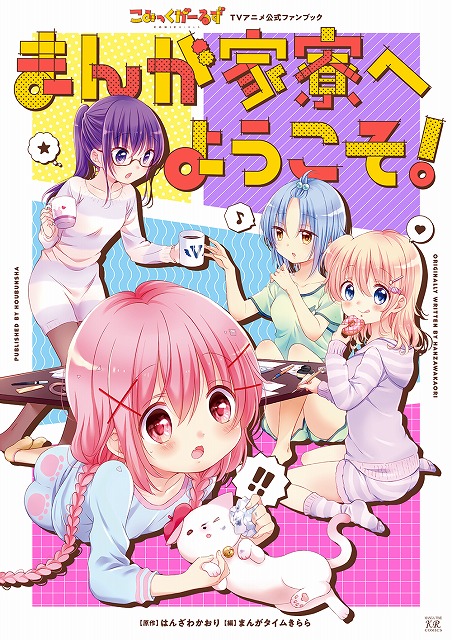 Contents include an exclusive interview of the main staff & cast, lots of character references, art direction notes, Kaos’ manuscripts, etc! There are so many things in this fanbook that makes it a must-have for every Comic Girls fan!

* All the product is for domestic sales only. 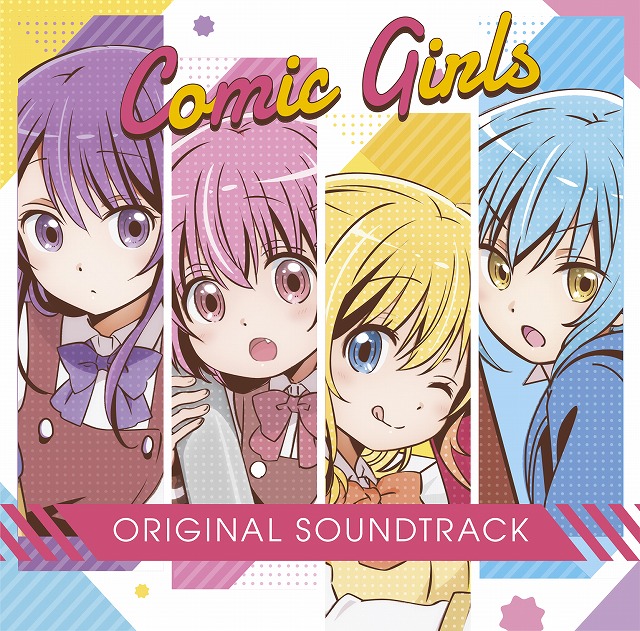 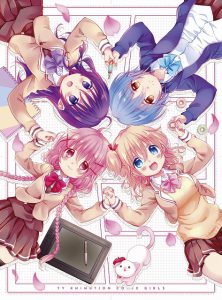 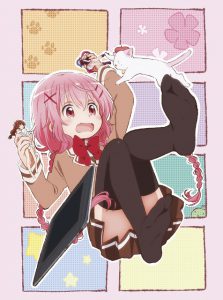 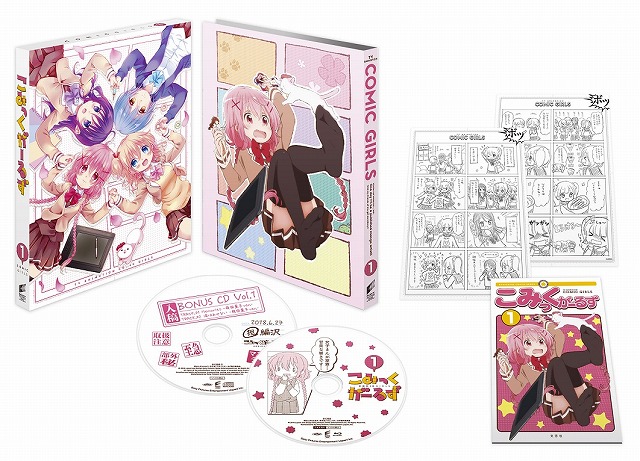 Full versions of the opening and ending theme songs / collections of PV & TVCM. There will also be lots of special gifts such as a CD of characters’ solo ver. theme songs in the coming Blu-ray & DVD! 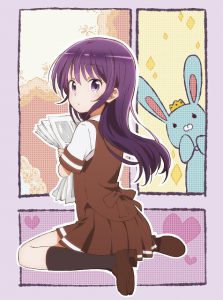 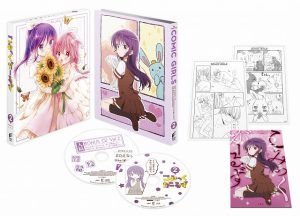 Vol.1 – Vol.4 of the original comic Comic Girls is now on sale!

Information for the Anime Comic Girls 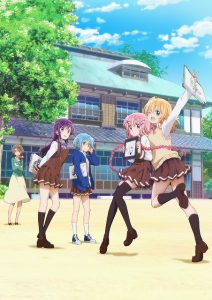 Preview scenes from the final episode 12 of Hisone to Maso-tan, “”
A Feast for the Eyes: Food and Cooking Anime!! 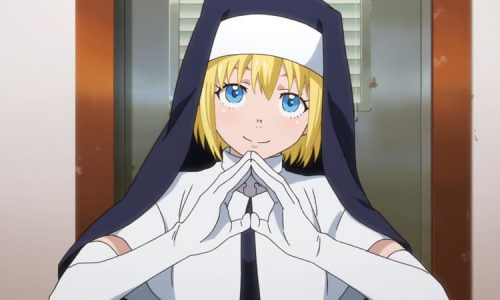